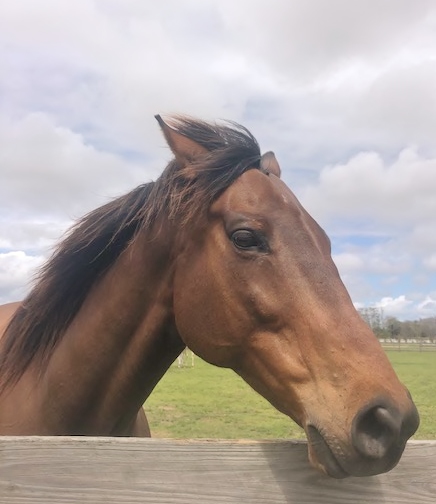 Meet The Animals Series #9: The Story of Elessar

The newly born foal scrambled to his feet, wobbled a bit and then searched under the belly of his mama to find her teats and drink deeply of her luscious milk. The humans looking on had high hopes for this bay thoroughbred colt and, without too much originality, named him Hope Is Rising.

However, the trainer, watching intently, had his doubts. The legs and neck were too long to promise the necessary speed for a track champion. "But still", he told himself, "I could be wrong...though... I rarely am.."

The early days and months for this new colt were spent nursing, exploring, running around the paddock and sleeping contently under the protection of his calm and sweet-smelling mama.

Humans came frequently to touch him all over, administer a stinging pinch of an injection every so often and to begin getting him used to a halter and lead rope. Hope is Rising good-naturedly let them do as they would, as he eagerly explored the various items in their hands, the shirts they were wearing, their boots and especially their hats, which he very quickly became proficient at removing!

They weaned him fairly early, but slowly enough for him to calmly accept the separation from his mama and the switchover to an equine milk replacer and, eventually, pellets. He was beginning to demonstrate an amiable personality with a curiosity about each new experience that came his way.

The trainer, observing these personality traits, was even more confirmed in his doubts about the making of a champion of this colt. "Not enough fire, not high-strung enough for a winner", he thought to himself privately.

Soon enough, training began in earnest and the trainer's concerns were confirmed early on. But the "owners" wanted to persevere.

Finally, beyond anyone's expectations, Hope Is Rising won an actual first place!! (With some significant earnings for the humans.)

"He won because he has heart", declared the trainer remarking upon the first place win. "This horse shouldn't BE a champion, but his heart won the day!"

Who knew how prophetic those words were. Not for more wins, because by his 5th year of life, Hope Is Rising never won another race, nor did he ever place again. But his story will show that his big heart made him a champion many times over...in unexpected ways.

In that 5th year of his life, the trainer observing Hope Is Rising, harbored some suspicions that the horse may have been infected with a disease known as EPM (Equine Protozoal Myeloencephalitis), which can be difficult to diagnose solely by observation of symptoms.

He spoke to the human owners about his concerns but, because both the testing and treatment of EPM are expensive and Hope Is Rising was no longer bringing in any income, they made the decision to turn him over to an off-track thoroughbred horse rescue, not having the heart to auction him out to a kill pen and the potential of the meat truck; as happens all too often when the humans are done with a thoroughbred...

Hope Is Rising, being used to being shuffled around to different locations, took it all in his stride and good-naturedly endured the changes in his life.

Until, one day, a frail, somewhat elderly woman visited the equine rescue facility, looked into his eyes, adopted him and brought him to the boarding barn (where, years earlier, Christine of What If Farms and her three horses had boarded shortly after their return from Wyoming).

The horse with the big heart, now called by his barn name, Hope, infused the woman with hope indeed, as she was ill and her future uncertain. She went every day to the barn where he now resided, fed him, cleaned his stall, groomed him and had a trainer exercise him, She did all this with bright, hopeful eyes as this adorable gelding brought joy into her narrowed world. She smiled and laughed and had months of enjoying her life, in spite of her illness, because of Hope.

Then came the day when she could no longer care for him and was admitted into the hospital. The kind owner of the boarding barn had her staff take care of Hope for awhile. But, when it appeared that the woman wasn't going to be coming out of the hospital, the boarding barn owner called the hospitalized woman to see what to do next.

"Please, PLEASE don't take him back to the rescue. PLEASE find him a good home with kind humans", the woman tearfully pleaded.

The owner of the boarding barn placed a call to Christine.

The first sight she had of Hope was of a very tall bay gelding, seemingly with a small smile curving around his adorable mouth, ripping the fly mask off of one of his paddock mates. Later, Christine would look back at this introduction with a rueful smile as she bought fly mask after fly mask to replace the ones torn off her horses' faces and often used as a tug-of-war rope by Hope and whomever would play with him.

Hope arrived at What If Farms shortly after this first meeting, settled in swiftly and was renamed Elessar! (After the Elvish name for King Aragorn in The Lord Of The Rings - (J.R.R. Tolkein) who brought hope and promise as he emerged as the returning High King).

Elessar now shared a pasture with Coltrane and Isabella. Being just six years old when he arrived, he brought with him the lingering playfulness and curiosity of a young foal. He would goad Coltrane into horse play which helped Coltrane, even if briefly, to re-live the play and comradery of his golden days with Poet.

One day, on an ordinary Saturday, Preacher, in the pastures with Elessar and the others, suddenly began laying down somewhat frequently. He began to exhibit slight signs of discomfort but none so exaggerated as to cause the humans to immediately rush to the conclusion of a colic.

But Elessar wasn't fooled. Each time Preacher lay down, Elessar would nose him up and then make him trot continually. He did this again and again, until it dawned on the humans that Preacher was indeed colicking and that Elessar was doing exactly what THEY should have been doing. Getting Preacher up and getting him to move!!!

Of course, the vet was called immediately. Thankfully, the colic was resolved in a matter of hours.

Elessar, with his big heart, knew what to do and did it. He was the champion that day! He very probably saved Preacher's life with his early detection and determination.

Then came Coltrane's diagnosis of DSLD (Degenerative Suspensory Ligament Desmitis) which was in a sudden acute phase causing him tremendous pain requiring him to lie down frequently, which only added to the problem because he could barely get up once he had been down for awhile.

The humans kept watch and would time his lie-downs so that his limbs wouldn't fall asleep. Then, with cookies and words of encouragement, would help him back up.

Elessar, with his big heart, caught on quickly that, although Coltrane needed to rest his painful hind legs, he also needed to get up again after not too much time had passed.

So it was, that the humans began to see Elessar share in the process of getting the big, sweet-eyed Coltrane back on his feet after a lie down.

Thankfully, in time, with much treatment both allopathic and holistic, Coltrane got beyond the danger zone of the acute phase of DSLD. However, his hind end had lost significant muscle mass and his front end was over-used and trembling as his weight shifted forward to avoid the pain of the hind.

Coltrane was not in robust shape at all.

Enter our big-hearted champion Elessar. Once again knowing exactly what to do.

Each morning under cool skies as the sun was barely rising, Elessar would play. He would shake his head playfully, mock nip at Coltrane, chase Coltrane around a bit and get Coltrane's horsey play mechanism fired up. Before long, there was Coltrane, trotting, rearing up with Elessar (not too high at first) and turning away with a playful buck.

In time, the humans looked at Coltrane in wonder, because the formerly dissipated hind end was now full and lush with muscle. His front legs were strengthened and no longer trembling under his weight when he would get up. His eyes were brighter, his enjoyment of life renewed.

Eventually, Coltrane could gallop into the pasture with the two other thoroughbreds, even with his dropped fetlocks, looking like the tremendous racehorse he had always been.

Nothing seems to slow down our gregarious, humorous, good-natured, big-hearted boy, Elessar! Not the Florida heat nor the diagnosis of EPM (which we are treating allopathically and holistically, with the major part of the treatment, as this point, being holistic).

Not a day goes by when Elessar doesn't bring a smile or a chuckle to us here at What If Farms! We humans are graced to be in the presence of this champion with a huge heart, bringer of hope, beloved Elessar!