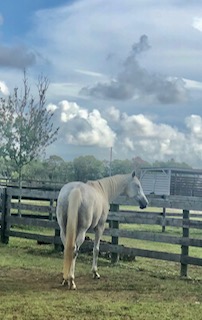 Meet The Animals Series #8: The Story of Isabella

Isabella stepped gingerly out of the back of the stall where she found herself and onto the waiting lush grass, sniffing cautiously. The aroma tantalized every sense in her being and, in a moment, she was enthusiastically munching. Her thin body, with its swollen, painful ball of bony arthritic changes in her left front leg, her spine curvature and her sunken right eye socket with the cloudiness on that eye, seemed to relax in a way that was palpable to all who observed her introduction to the freedom of the outdoors, with grass under hoof.

"Image of Rachel", now called Isabella, had found her sanctuary and forever home at What If Farms.

Gulf Stream Race Track had been her home for most of her 7 years. She was rarely outside a stall and was fed the usual-horse-world- routine of two grain meals a day with some hay in between, but never the luxury of the 17 hours of foraging that the horse digestive tract requires; and certainly, rarely, pasture grass.

At two and three years of age, the sweet-spirited, grey filly brought her human "owners" first place wins and good earnings. Anybody who watched her run was transfixed by her speed and by the luminosity of her glorious long legs and neck soaring in a blur of shiny whiteness. It was as though she was flying with Pegasus' wings.

By 4 years of age, she reached new heights in wins and earnings. By the end of that year she had had 79 starts. But, given that she was being raced (as are all thoroughbreds) long before her bone platelets had closed, the hard use of her superb body began to show the toll that was being taken. (The last platelets on a horse close between 5 1/2 and 8 years of age.)

Her 5th year of racing began a significant decline.

This was the year that the glorious, sweet Pegasus crashed to the ground, slipping and rolling over in a race. Her wings that had been unfurled as she ran and flew in a blur of white glory, in an instant,  crushed.  As the onlookers gasped in horror, she struggled in excruciating pain to her feet (her wings now in tatters) and was led off the track.

Somehow, with time off and rest, her human "owners" felt to race her again.

Race her, even with her now-curved spine, crushed eye socket and ever-increasing arthritis.

Thus, at 6 years of age, she had only 7 starts, no longer placing in her usual top 3 places and her earnings plummeted. ..so did the amount of food she was given.

"She is of no use to us. She doesn't earn her keep. Keep cutting the feed down! But not so much that we get reported to the authorities..."

"Why don't you breed her. With her lineage, you could probably make up some losses selling her foals. It will be worth it"

At this point, a horsey guardian angel (in disguise as a human at Gulf Stream), looking at this emaciated and crippled mare, got the word out and folks raised the money to buy her from the cruel man and got her to a rescue rehab and re-home facility.

"Christine, would you have room for this beautiful mare at your What If Farms? She so needs a forever home. She's in bad shape"...

Christine sighed, being close to full up, concerned about space and taking on another disabled horse, yet knew what her answer would be. "I'll come by and meet her to see if it's a fit", she said (already knowing it would be).

Looking at the bony, arthritic mare, Christine's heart opened, her vision somehow saw the Pegasus wings that once had been the mare's, and she knew "Image of Rachel" was coming home forever to What If Farms.

And, as Christine gazed at her at that rescue facility, when the mare flattened her ears at the horse next to her, glaring out of her good eye while she was eating her hay, her fire and regal energy were apparent!  At that moment, her name was changed to Isabella... Queen Isabella!

"I don't know, Christine, prepare yourself. She's crashing", said the renown, knowledgeable, holistic vet who came and worked on Isabella's now-barefoot hooves as well as manually caring for her teeth. Christine had been warned by folks who knew the racetrack ways, that when Isabella came off the drugs with which they had pumped her full at the track, it would look like she was dying. She was coming off the drugs and, even to the vet, it looked like she was dying.

But when a horse has its destiny, when it is not yet time to cross the Rainbow Bridge, other winged Beings, Angels, step in and miracles occur!

These days, the humans surrounding her are kind, gentle and understanding that, some days, she is in so much pain that even her skin hurts too much for her to be touched. Especially on her right side barrel, the "whipping side" (from the track days). Yet, with careful and meticulous hoof trims, regular myofascial release body work, love, and devoted care, she progresses and heals; gracing all those in her presence with abundant sweetness while sharing the wonder of all that occurs in her world.

Now, two and a half years later, on a cool and blustery day when the off-track thoroughbreds get to running on the land at What If Farms, the humans, looking up from their various chores to watch them, upon seeing her run, feel their breath being taken away by the beauty of superb blur of white luminosity that is Isabella and, nodding to themselves, whisper, "Surely it is a Pegasus running and flying in that field."