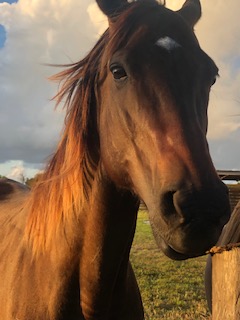 Meet The Animals Series #7: The Story of Angelica

"Before Lord God made the Sea and the Land, He held all the stars in the palm of his hand. And they ran through his fingers like grains of sand. And one little star fell alone...And we're lost out here in the stars. Little stars, big stars blowing through the night."     (Maxwell Anderson and Kurt Weill).

The little star, that was lost in the stars, wanted so much to know what it was like to feel the ground, the wind and the rain on the Earth upon which she looked down. And, looking down, she observed the most marvelous of creatures...the Horse. She knew that she needed to experience being a horse! Putting in her request to the star counsel, they advised that things were not so great at this time for the horse beings and advised against it. But she persisted.

So her wish was granted; with the caveat that at least she be born in Ireland, land of magic and the faerie folk, so that she needn't feel completely homesick for the stars above.

Angelica, or "Angela's Dream", as she was named when born, came to earth on a blustery Irish morning. She stood up almost immediately and was awash in gratitude that she was now embodied and could frolic, run, nurse, whinny and enjoy all the horsey joys she had hoped for!

Being bred as a thoroughbred, bound for racing, she couldn't have imagined what would be in store for her.

Her carefree filly life was short lived as in-earnest training began for the track. She was weaned and "gentled" and began the rigorous training that would ensure wins on the track. Day after day, she ran! Being barely two years old, her joints hurt almost daily. She wanted to just rest and graze on the lush Irish grass, but was locked in a 12' x 12' stall almost 24 hours a day, except when training was required.

The little star yearned just to be able to see stars at night and to walk freely on the earth.

Her one consolation in this tortuous isolation was the presence of a small, red-headed human. Her groom. He was kind and spoke gently to her. Her rubbed down her sore limbs each day after training. He would prepare extra special delicacies for her in addition to her normal feed and hay. He slept on a cot outside her stall and sang lovely Irish lullabies to croon her to sleep.

"Angela's Dream" raced often in Dublin. The little star loved the thunderous sound of her own hooves as she galloped around the track. She loved the wild energy of the race. She loved the care of the red-headed human. Being a horse was, indeed, not what she had expected. But she complied with all that was asked of her and took comfort in the wonderful aspects of being a horse.

However, things would change abruptly for the beautiful mare. One day, she found herself in a small, dark, claustrophobic crate being loaded onto a apparatus of which she had no knowledge. She only knew that as this apparatus revved up and took off into the air, she felt dizzy and as though the ground had been pulled out from under her with a tremendous pressure in her delicate ears.

A screeching landing and offload left the little mare in a place of bright sun, heat and tropical humidity. Her dear red-headed groom was nowhere to be found!

In her disorientation and confusion, the beautiful creature shut herself down and yearned to be lost in the stars once more.

"And sometimes it seems maybe God's gone away, forgetting his promise that we've heard him say... And we're lost out here in the stars." (Maxwell Anderson and Kurt Weill)

Severe arthritis led to the end of racing for "Angela's Dream" and for a year she found herself in a rescue with numerous other horses and a kind lady who meant well for her.

One Spring morning, there was something different in the air. A kind of humming of expectation. Something was about to change.

Indeed it did, when on that very afternoon, on an overcast, humid Florida day, a small, human female came to meet her. The human saw the star on her forehead and knew that this was, indeed, a very special Being. There was a big, red Belgian Warmblood on her farm who was lonely for a pair bond of his own, since he shared his pasture with the deeply pair-bonded Poet and Coltrane. The human felt in her heart that this might be the one for Preacher and so adoption papers were signed and within a couple of days, a trailer arrived at What If Farms with the beautiful "Angela's Dream".

The pasture was cleared for her and the three geldings, Poet, Coltrane and Preacher hovered outside the fence. As she stepped into the pasture, she ran and danced for joy in the rain-soaked grass. Preacher seeing her, ran to her and she to him as though in a slow-motion romance movie. It was an immediate bond and a forever bond.

He was red-headed, like the human groom she adored. She was beautiful and magical and spoke to his horse soul.

Her name no longer needed to be associated with someone else's dream. The small, female human knew she was really called Angelica, for the angel she is . Angelica is forever home at What If Farms. With her forever bond, Preacher.

To the humans that are around her she seems distant, perhaps a bit shut down still. Although not as much as when she first arrived. But they also realize that they have a Being among them who is not of this earth. An ethereal, faerie Being. The one little star who fell alone, and is, perhaps, still lost in the stars.

The lyrics of the song say, "And the Lord God hunted through the wide night air for the little dark star in the wind down there and he stated and promised he'd take special care so it wouldn't get lost again." (Maxwell Anderson and Kurt Weill)

Angelica definitely has the special care of the star beings who hover near to her and around her as she lives lightly on this earth.  And, one day, she will return to the stars and to being the beautiful star she always was.