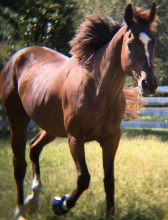 Poet looked up and over at his pair bond, Coltrane, who wished him a silent wish for a beautiful voyage, then up at the beloved, familiar human face, sighed deeply, and then saw her with his physical eyes no more.

As his spirit hovered above his now-stilled body, he saw the female human throw herself on his head and weep uncontrollably.

“But, I let her know last night that I would be transitioning today…why is she so unhappy? I am free from pain and the constraints of my tortured body. We had such a nice farewell last night. Doesn't she understand?”

“Dear One”, he whispered in the female’s ear, “I will honor your last words to me. I will indeed meet you on the rainbow bridge when you cross over.”

The night before his passing, Poet couldn’t walk but a few steps. He had laid down earlier that week when his hind end couldn’t hold him up. But the vet was able to help him up to feel his legs again, and so, he enjoyed a few more sun and companionship-filled days.

That night,however, he knew it was his time. When his human came to say goodnight and give him some extra hay, he looked at her with the stars of eternity in his eyes, smiling a reassurance that he was ready. She laid her hands on him to let some energy flow into his almost-numb hind end and he responded with the sharing of energy of his own.

“My hands are tingling and on fire,” thought the female human, as she only just barely touched him.

“Good”, thought Poet. “This is a good, temporary farewell until she joins me on the next part of the journey.”

The female human only later realized that this night was his farewell. When the tears calmed, she was able to look back on his story as she knew it and as he had "relayed" to her.

Magnificode was a small but beautifully made thoroughbred with a blaze on his forehead that looked like a falling star. His loving, generous nature gave the humans who raced him everything he could, even as they whipped and spurred him to go faster and faster around the track.

Then a slip and fall on that track, a brief attempt at repairing and resting him, and the decision that he would race no more.

So he was shipped and traded from barn to barn and trainer to trainer who saw the potential for a “promising dressage horse” in this graceful gelding.

All horses need to be used for SOMETHING, being the underlying belief.

And, in his usual way, Magnificode, soon to be nicknamed “Toad”, obliged as best he could, in spite of his now constant stiffness in his spine and the pain in the middle of his back, where he had hit it when he had the spill on the track.

These years were not kind or gentle times for the quiet thoroughbred. Another horse might have become hostile or “difficult to handle”. But Toad quietly endured the pulling, pushing, slapping and other means the trainers used to develop his "promising dressage horse” skills.

Then a turning point came, quietly and uneventfully, as a young girl and her mother agreed to pay the most recent trainer of Toad an exorbitant price for the beautiful horse, in the hope that THIS would be the horse that would fulfill the young girl’s dreams of competition and ribbons in various disciplines, including jumping.

Poet was very fond of the two female humans who had gentle hands and voices and who made sure he had the best of everything they could provide…he would have loved to have been outside more, munching grass and gazing at the clouds during the day and the starry skies at night, but, being a former racehorse, he knew that his life was just “how things were”. And he was grateful for the two lovely humans who now cared for him.

The jumping was getting harder and harder for him, but he so wanted the girl to be happy. He also enjoyed her energy of ebullient joy, every time they flew over the poles that had been set up for them.

Then, one day, the groom who had been clipping Toad’s hair made a frantic phone call to the mother. “Robin, you need to get here as soon as possible. Toad has a bump on his back. I mean, maybe it’s an insect bite giving him a huge hive…but it just doesn’t look right!”

Then began going down the path of vets, x-rays and eventually MRIs and the variety of pronouncements and opinions which followed.

Mother and daughter rode the roller coaster of hope and despair during this time.

But, it was also during this time that they had met a rather unusual woman, who had come to their boarding barn from Wyoming with her three horses, at precisely the same time as they had brought Toad there.

She never rode her horses, but spent hours with them in their paddocks, sometimes just sitting under a tree gazing at the clouds in the day and up at the starry skies at night.

They liked her warm and open manner, even if somewhat befuddled by her different ways with horses. Privately, they wondered why in the world she didn’t utilize her "rideable horses", but they enjoyed discussing different “philosophies of horse” with her and always looked for her when they came to the barn.

“Yep, Christine’s in the paddock lying down with her horses…as usual. Her ‘pasture ornaments’ ” (said with definite knowledge and a slight sneer by other boarders at the barn whenever the mother and daughter inquired where the woman was.)

Those days at the boarding barn ended for both mother, daughter and the woman, as mother and daughter brought Toad to a rehab barn to work with his now-diagnosed kissing spine through movement and bio-mechanics; and the woman found land where her horses could, once again, roam on many acres. in freedom, as they had in Wyoming.

They stayed in touch, but life’s pulls made the contact more and more infrequent.

However, things, as usual, were about to change…and rapidly.

After 7 months of bio-mechanics and actually working up to a canter, Toad suddenly “relapsed” and the girl was told they would have to start again at the walk and work back up.

This is when the girl made her decision.

A couple of phone calls and a few text messages later, Toad arrived at the land that was to become What If Farms.

So began a time of contentment, freedom and deep friendship for Toad.

He immediately connected with his to-be pair bond, Coltrane. The two became inseparable. Walking in synchronized rhythm, grazing together, grooming each other, playing in the windy weather and, even though free to go in and out of the stalls as they wished, they often chose to stay all night together in one stall.

He also met Baby Doe and they were”smitten” with each other. There were some delightfully “frisky” times between those two.

And, one evening, as Toad gazed into the distance with this mane gently blowing behind him and his eye dreamy and far away, the woman, his female human,suddenly knew his real name.

From that moment on, he was called Poet.

(Well, sometimes he was called Poe Poe Man, as horsey nicknames go...but only with deep affection)

Over a year and a half passed and the woman allowed Poet to enter her heart like no other being before. As he rested in the shade of what would become known as “Poet’s Tree”, she would just stand or sit with him, breathing with him, listening to him, and enjoying the peaceful companionship of his sweet nature.

Poet had a particular fondness, when the horses were running free on the land, to walk onto the human porch in front of the tack room of the big, unused barn. He would catch the breeze, standing with his heel cocked in relaxation, with Coltrane at his side.

On particularly hot days, this porch was where one could without fail find Poet resting and breathing.

When the horsey chiropractor would come, he would even indicate that THERE was where he wanted his adjustment!

Then in the autumn of the beginning of the second year, one day Poet started walking strangely…as though his hind end didn’t belong to his front. He would try to canter with the others as they ran free on the land, but his balance was not there and he slipped on the bank of one of the ponds. Something was wrong.

Poet went back into the pasture and didn’t venture out as much. The faithful Coltrane always by his side

The vet who had treated him when he was with the girl and her mom, revealed that the MRIs they had taken at the time, showed some of the worst muscle damage and scarring she had ever seen.

Thus, the hump on his back would swell when the inflammation got particularly severe. Add to that, he didn’t sweat (for which only cooler weather was the solution…everything, including a rigged-up air conditioned stall, had been tried) Plus, he had ulcers which, at least ,were finally diagnosed and treated

Poet loved his herd, his Coltrane and his dear Baby Doe. He was, in his quiet, unassuming way, the grounding and balancing heart of the herd (as noted much later after his crossing when the herd began to have integration issues.)

He was content just stand peacefully in the middle of the pasture as the others milled about. The pain was a constant as evidenced by his heaving flanks and blowing nostrils, even when the weather cooled. The woman did everything and tried everything and just waited and watched.

Then came a Monday morning where he was laying down and couldn’t get up, not for anything, not even breakfast. The vet was called. They did get him to stand again. But the following days were hard for him and he grew more and more wobbly, more unsure as he walked.

Then that last beautiful star-filled-farewell evening.

The next morning, when he couldn’t stand, they did everything to get him up.

For hours. That part of his story is really too awful to relay here.

The woman, his human, spoke to him quietly asking what HE wanted.

He was ready. He HAD been. So the final goodbye and rainbow promise.

But, you see, it wasn’t final at all. Poet made sure of that.

A week to the day of his passing, the woman was all alone at the farm, in the field. She felt a gentle nudge behind her and looked around but there was no physical horse there. The nudge, however, prompted her to look up in the sky and there, the gift of a double rainbow radiantly lit up the rain clouds.

And softly, but audibly nickered in her ear, the woman heard, “I will be waiting for you.... on the Rainbow Bridge …"

(When you come visit What If Farms, you will be able to sit and relax on "Poet's Porch", named in his honor)