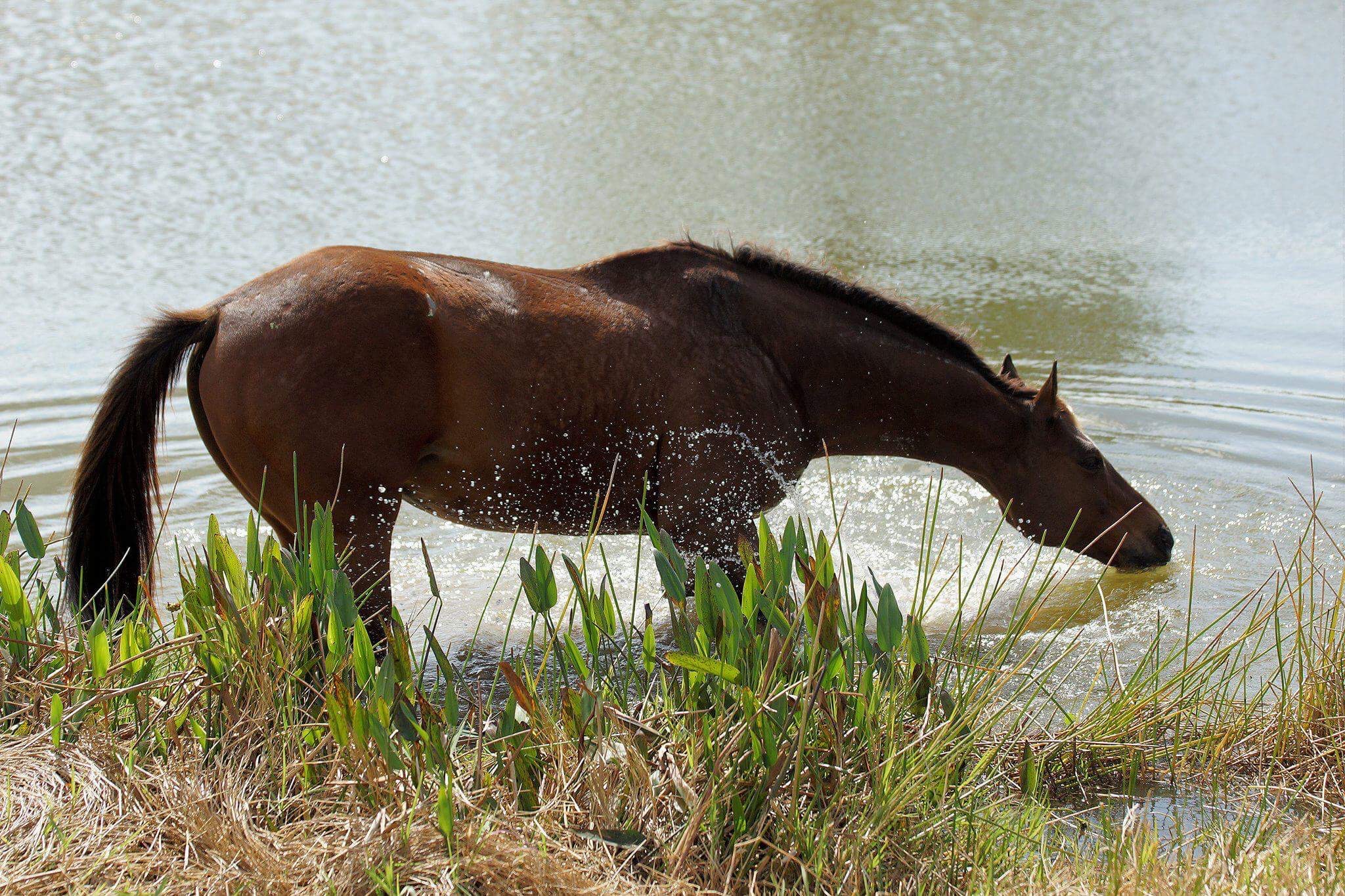 Meet The Animals Series #4: The Story of Coltrane

Thunderous cheering from the crowd, a brief, sweaty, breathless walk to the Winner’s Circle  and there Coltrane stood quietly, as human handshakes and congratulations were shared among the smiling owners, trainer and groom.

Strangely, no one ever thought to thank Coltrane for his part in the win. But that didn't matter.  His mind was already on dinner: the delicious, sugary, supplement-laced feed and the substantial amounts of hay that awaited him.

He knew the drill. Stand quietly. Get hosed down. Legs rubbed with lineament, then wrapped. Then a walk to the stall where he would stand, shut in for hours, until the next exercise or training session, in preparation for the next race.

Years of this life had accustomed the sweet-eyed 16.3 hand-high thoroughbred gelding to the isolation and lack of turnout outdoors. Added to that there was the hard, often thoughtless, unkind handling.  He accommodated while shutting parts of himself down. Then he would travel to that otherworldly place horses are able to access when this human world of ours impinges too stringently on their being-ness.

“Boss, he’s just slowing down. I can’t get the times on him we used to get.  I think it may be time to retire this guy. Two hundred races…what a horse!”

With that, shortly thereafter, Coltrane was dropped off in a pasture that had a trough for water, grass and a tired, old mare for company. “In retirement”, they said.

The grass was depleting more swiftly now with two horses on it.  The water trough was sometimes full with rank water if it rained and, if not, the horses would lick at the dew.  In winter, snow quenched their thirst as they huddled together in the raw Kentucky wind.

No one came. There was no more hay. Both horses grew thinner and thinner. Their friendship deepened and in that friendship they found comfort.

“Call Animal Control!  There’s two horses, more like skeletons, in Murphy’s old pasture. Don’t know what they’re doing there, but they’re starving. One is laying down!!!”

Coltrane and the mare were whisked away to a temporary shelter facility. Separated by high stall walls, not able to smell or touch each other, they felt anxiety that almost superseded the relief they had felt at gradually having more food in their bellies.

And then the old mare colicked. In her weakened state, nothing remedied this colic. She passed beyond this world as quietly as she had lived in it.

Beyond not hearing her snorts and shuffling in the next stall. Beyond not having been able to nuzzle her or huddle close to her.

He felt her beautiful spirit rise from her lifeless body and bid him a sweet farewell.

One day, as he gazed out the window of his stall with now dulled and inward turning eyes, he saw a human couple approaching.  He didn’t really care. But this approach would begin the events that would eventually lead him “forever home.”

The couple brought him to a ranch in Florida.

In the first couple of months at this ranch, he swiftly earned a reputation of being a difficult horse, a crazy horse, a terrifying horse.

He was kept for hours in a stall. He would weave his head in anxiety waiting for his food. He would run around the fence line of the tiny paddock in a state of high anxiety when all the other horses were brought in first from turnout leaving him alone. He couldn't help but hear and sense the scorn and criticism aimed at him and the Ranch Manager’s Wife (the female of the human couple who had rescued him).

Add to that, the kind and well-meaning Ranch Manager’s Wife hired a trainer who arrogantly thought she could ride him, alone (no other horse to accompany) off-property in her third session with him in a Western saddle (which he had not experience since his first days of learning to be under saddle).

When a neighborhood dog rushed out at him, nipping at his heels, all he could do was bolt at racetrack speeds (as 55 million years of evolution would demand).

With the young trainer in the hospital, all “training” ceased.

The unkind words, misunderstanding and ignorance of the barn humans increased, creating an aura of even more anxiety and stress around both the kind, sweet-eyed Coltrane and  the  sensitive, open-hearted Ranch Manager’s Wife.

Then, on an extraordinarily cold-for-Florida January night, a woman arrived at the ranch, her three horses arriving by transport a few hours later (at 3 a.m.!) As the ranch manager and his wife helped her unload and situate her three, very tired horses,  a bond grew between the humans.

This bond only expanded when the woman met Coltrane for the first time the next day and  experienced an immediate heart connection with the big, beautiful, sweet-eyed thoroughbred.

Every time she was at the barn to visit with her own three (which was every day) she always sought him out, sometimes with treats, sometimes just with soft words of love and admiration.

He would weave in his stall with anxiety and nose bump the  stall door latch as if asking to be out. Which, of course,  at the time, the woman couldn’t do.  But she whispered promises to him which neither of them, at the time, dreamed could be fulfilled.

The woman and her Three eventually moved to the land that would become What If Farms, promising the Ranch Manager’s Wife that Coltrane would always have a place at the land, should circumstances change.

Overnight, it seemed,this “crazy”, “terrible”, “hard to handle” horse reverted to the gentle,gentlemanly, sweet-eyed thoroughbred that he had always been.

The Ranch Manager’s Wife, knowing he was well and cared for, gave Coltrane to the woman to become his human. The woman was overjoyed!

‍Things just kept getting better for Coltrane!  Shortly after his arrival, the beloved Poet (Magnificode/Toad) arrived and the two geldings found a friendship, a pair-bond of such depth which we, humans, can only dream of. The geldings were nicknamed the “Bromancers”. Their days were spent just being horses.

‍The sight of them playing together, grooming each other, racing each other and nuzzling close at night (choosing to be in one stall since they were never locked in and could go in and out at will) filled anyone who observed them with inordinate delight.

When all the horses were let out on the land from the pastures, Coltrane and Poet would lead the herd in wonderful chases. Coltrane would shelter Poet from any pushy, overly playful horse (Spirit) as well as protect newcomers like Preacher.

They would stand behind his big, beautiful body as he calmly grazed and no one, even the intrepid Spirit, dared to approach.

When humans came to visit (some who had never been around such large beings as horses) the woman would always pick Coltrane for them to groom, knowing his kindness and gentleness would open their hearts and alleviate fears.

These were the golden days.

Days when Coltrane and Poet would catch a breath of air on the patio of the big unused barn, the patio that would later be renamed “Poet’s Porch”.

Days when the herd would wander and graze on the land, happily coming into their pastures for evening feed and winding down.

Days when Poet would gaze into the distance in the evenings and Coltrane would stay safe in his open-gated stall, still fearing abandonment in a pasture, until Poet would join him for mutual grooming and standing dozing.

But Poet began slowing down, and Coltrane loathe to leave him, would stay behind while the others roamed the land, so that Poet, peacefully breathing under his tree,would have company.

Those last months with Poet were quiet and treasured, until the morning came when Coltrane said his last farewell and wished his friend a good journey as Poet crossed over the Rainbow Bridge

This loss has not ever really left Coltrane, even to this day... added to his other losses.

Still, the irrepressible 6-year-old gelding, Elessar, goads him into playing: rearing and running and bucking.  Sweet Isabella nuzzles with him, nose to nose in the twilight after-dinner hours.

And Coltrane is content. He is forever home at What If Farms...

…plus he has the best friend horse or human could wish for, waiting for him on the Rainbow Bridge.