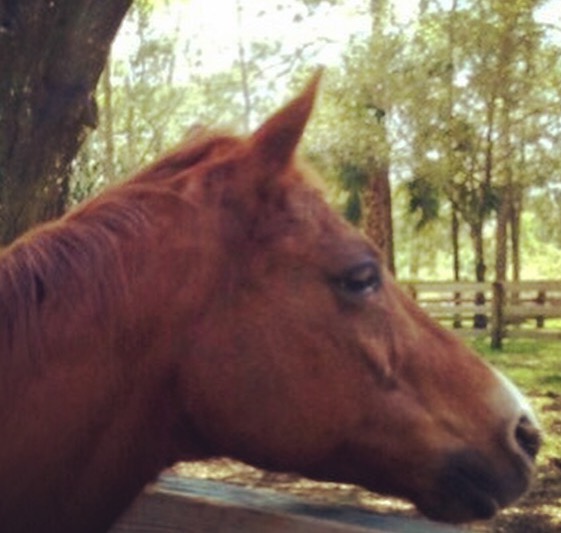 Meet The Animals Series #3: The Story of Serenity

THE STORY OF:  SERENITY (Also known as the Little Red Wren, or…Wren)

The sweet-faced, large nostril-ed mare, walked slowly back to her lean-to where her cherished sister waited quietly there for her.  She blew through those delightful nostrils and her flanks heaved and she gradually caught her breath.

They had named her Ginger for a reason.  She could go from standing to a neck-jolting canter in less than 45 seconds. Even her walk felt like a trot.

As she and her sister touched noses in greeting, Ginger looked eagerly around for the flake of hay she knew would be forthcoming and dipped her lips into the water pail that was only half full ,with dead gnats and mosquitoes floating on the surface.

In this town, located just above the Florida keys, horses were ridden hard and cared for minimally.  That’s just how things were done here.  Ginger accepted her life as it was and so the years passed.

But one day, quite unexpectedly, everything changed. EVERYTHING.

And with that,Ginger was unceremoniously load into a small ,stuffy trailer without even a moment to say goodbye to her constant companion and pair bond.

“I’m gonna rename her.  Ginger is too hot.  Let’s see…okay, I’m gonna name her, Serenity.That oughta calm her down a bit. Ha ha.”

For Serenity, everything she had ever known was gone and the new life ahead of her was not an easy one.

Although the human who had bought her had the best of intentions, life circumstances created a situation where living conditions were almost unendurable.

Serenity barely ever saw the sun or left her 12 x 12 stall. If the human was too busy with her child and her job, the muck would build up in that stall  to at least ankle deep. Turnout had a forever-broken fence so there was no grazing or even walking around.  And though there were other horses there, she never got to sniff or touch them.

“This is Serenity .Be sure if you walk behind her you just touch her rump so she knows you’re there.  She’s very gentle. Wouldn’t hurt a fly.  Let’s tack her up and get you going on her.”

Serenity met The New One (human)and  so began what Serenity would experience as the “gradual change”.

Soon after The New One began “leasing” her, her living quarters changed.  There was now at least a dusty turnout, trees, other horses and a way for her to at least hang her head out of the stall enough to see the stars at night and watch the sunrise at dawn.

Her human rode her hard and demandingly. But The New One, who also came around quite often, just sat on her and let her walk as she would. The New One loved to brush her and bathe her and comb out her tail. The New One would bring her little goodies which she would hold out as Serenity greedily devoured them and  then sniffed her pockets for more.

“Serenity’s cut her leg open and I gotta work and can’t get there to be there when the vet comes.  Can you go out and see what’s going on?”

And so began part 2 of the “gradual change”.

As The New One rushed through traffic to get to the barn, the vet stitched up an ugly gash caused by barbed wire hidden in some bushes that Serenity encountered when ,finding her stall door latch open, went on an early morning romp on the property. (Why barbed wire was ANYWHERE on a horse property is, to this day, a mystery!)

“She’ll need stall rest and antibiotics. In a week you can start hand grazing her. I’ll be back in 4 days to change the bandage and check the stitches.  Can you handle the meds?  Can you be here?”.

The New One, also new to horses, nodded her head, looked at Serenity, knowing that the love that was bursting in her heart for that horse would guide her down all the unfamiliar roads ahead of her.

For two months,horse and human saw each other every day. There was, for the first two weeks, the daily battle of the antibiotic syringe.

There was brushing and massaging and soft words of love in the hours The New One spent just sitting on the floor of Serenity’s stall as the afternoons would while away.

There were the walks around the property and the deliciousness of the grass.  It was a time of tranquility.

But then, at the end of that time, circumstances again changed everything.

In a story too long to be told here, The New One and Serenity parted ways and the sweet mare was once again whisked away from all she knew and put into yet another tiny stall,only out when someone brought her out, ridden hard and ridden by often strange hands.

Then, one day, The New One appeared at the door of her stall. Serenity opened her eyes wide,perked up her ears and nickered softly.

“Let’s go for a walk, Girl. Oh my gosh, how I’ve missed you. I love you so much.  You look beautiful…(but what’s happened to your mane and tail? ) I’m moving out of Florida, beloved Serenity, but I promise you will ALWAYS have a home with me if you can just find your way to me.  Find your way to me, Girl.”

Two months later,as the leaves began to turn and the wind began its icy chill in eastern Wyoming, the phone rang and The New One, recognizing the familiar number picked up.

“Would you be willing to take Serenity to come live with you out there.  I just don’t have the time or money anymore and she’s just too hot for my son to ride. I want him to have a horse he can ride.  Could you take her? She will be yours for good.”

Within the day, the transport was arranged to bring the sweet mare out to Wyoming and two days later those wide eyes, large nostrils and perked ears looked over the stal ldoor of the transport and there was the New One standing at the bottom of the ramp!

Serenity got to know the two horses that were already there, the exquisite Baby Doe and the goofy, stalwart Spirit and together they roamed the prairie pastures, saw the constellations at night and shivered (even under the heaviest of blankets) in the subarctic temperatures of a Wyoming winter.

One day, while huddled in the weak warmth of the pole barn metal wall, Serenity looked up sleepily to see another huge truck like the one that had brought her here,driving up towards the field.

And, soon after, she found herself, with Doe, Spirit and The New One back in the warmth and green of Florida where they, all four, eventually found home on the land that would become What If Farms.

“Yeah, the winter was fine for Spirit , but Doe was in pain and Serenity was just miserable with the cold for the most part, so we came back.  And, no, Serenity does NOT need to be “trained” and ridden anymore.  She’s old and has “given at the office”.  My sweet, little red Wren can just enjoy being a horse for the rest of her life. She will always hold that place in my heart of the first horse I ever loved and will forever love.”

Serenity blew through her nose, glanced up at the sound of her name and smiled her little horsey smile. The changes were complete. She was home.