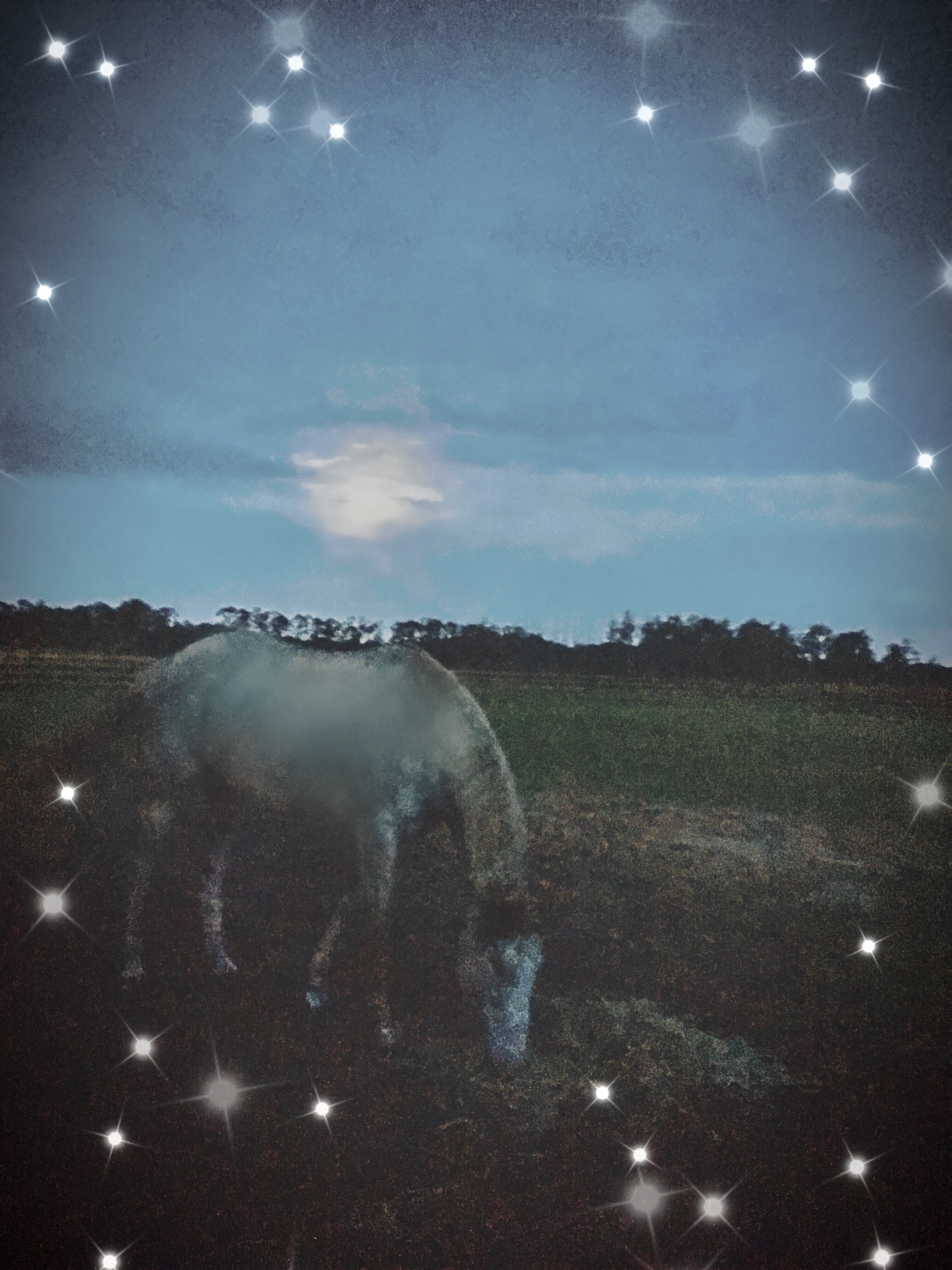 Meet The Animals Series #2 : The Story of Baby Doe

THE STORY OF:  BABY DOE

On a cool Spring evening in April, as fireflies and stars appeared in the darkening sky, a small white-colored filly entered this world and looked around with wonder in her precious eyes at the magic around her.

Anybody who knows of such matters, observing her entrance into the world, would have sworn they had just seen the birth of a unicorn. The light seemed to shimmer around her, her golden red medicine bonnet surely concealing her horn.

But the magic and presence of faerie folk scattered abruptly with the entrance of the breeders/owners of the farm.

“Yes, she surely is a beauty!  She will fetch a fine price.  You can already see her good confirmation. Yes… a fine price”.

And with that, they proceeded to dry her, made sure she was standing and walking (as IF she didn’t already KNOW she needed to do that) and immediately began what humans like to call “imprinting” or, in other words, making certain the filly was used to human touch and handling from the very beginning.

They named her a silly name that had nothing to do with who she really was.  For the next two years, besides weaning her when the time seemed right to THEM, they left her in peace in a pasture with her older brother Fritz.

Then she turned two.

“Seems a good time to get her under saddle and get some walk, trot, canter going . We can show her and make a fine sale in no time at all.”

At first, the little filly didn’t mind so much when they walked and trotted her in a circle on a lead rope on the ground…what they called “longeing”.  But then, after a while, it just became…beyond boring.

She endured the saddle and cinch which to her felt at once creepy (dead animal on her back) and tight and itchy (tender tummy skin).  But the bit (or as she sensed it, the cold, hard iron thing) they put in her mouth, tore at the sides of her sweet pink lips and tortured her tongue, so that her only relief was rolling her tongue outside of her mouth continuously while the bridle was on.

The human who was engineering these various forms of torture was large and demanding and always seemed, at least to her, in a tremendous hurry.

After numerous protesting bucks and rears, when he would attempt to get on her back, she finally realized that by just letting him do what he seemed so determined to do(while she daydreamed of stars and fireflies) the ordeal could be over far more quickly and she could go back to her pasture to be with her dear brother.

But something wasn’t feeling quite right in her front legs and hooves.  The sessions with the large man began to mean hours of throbbing pain afterwards.

As she slowed down when he would insist on a trot, he would use his spurs, rhythmically, on each step, to “instruct” her as to pace and his demands.

Her mind went from fireflies and starlight to red blurs of pain. There was no relief.

Until one day…”Yeah, she needs some pasture rest. There looks to be a hitch in that right shoulder.  We gotta rest her good so that she will show well when we send her on.”

Time passed with intervals of the peaceful happiness of the grass or snow in pasture, interspersed with the torture of the training.

One day,suddenly, with no time to say goodbye, Fritz, her brother, was loaded up and driven away and even that comfort was gone.

Eventually, the young mare turned her back on any humans that approached and warned them away, often with pinned ears and bared teeth. (Although there were a couple of them that she allowed to brush and caress her and whisper to her that she was “so beautiful” and “such a good girl”.)

Then came a day when the sweet mare suddenly didn’t feel like herself after being stung with something in her shoulder.  She felt dazed and sleepy, but could nicely return to her world of shimmering light and iridescent faerie wings.

After a long, unmemorable time riding in a dark, confined, moving “stall”, she found herself dreamily in a place of bright sun, heat and isolation in a more" earth-bound" stall.

“Oh no, she is not walking right.  Lameness in her right front.  Probably just a hitch or stiffness from the ride. Let’s give it 30 days and recheck.”

The 30 days passed in a fuzzy blur.

She remembered having to go around and round in an arena with a kinder man on her back…always being boringly longed beforehand.

She remembered being tied, all tacked up, in her stall to “teach her patience”

She also remembered a smaller, female human who would stop to see her and gently caress her, every single day.

This human even brought her a delightful new delicacy that was orange, tasting sweet and of the earth, with a satisfying crunch.

This human was always there to see that goofy, spotted, young gelding up at the other barn. But when the mare saw her drive up, she would whinny to her to be sure that the caresses and crunchy, orange delights were forthcoming. She felt trusting enough of this small human to whisper to her, "Please, I don't want to be a show horse". The small human gasped when she "heard" this and promised her she would do everything in her power to honor that wish. Even though it would require more money than she had at that time.

The 30 days passed and the “hitch “ or lameness in the right front still presented itself (without the aid of a nerve block to mask it).

“That’s it, I’m sending her back to you! I spent all this money and you sent her to me lame?!?  After all these years of doing business?  I was going to make good money on her and now she’s useless to me!”

On the periphery, the small, female human heard this conversation and the unstoppable tears ran down her cheeks.  The tears didn’t even stop when she got home and begged her best friend to loan her the huge amount of money it would cost to spare the mare.

As mysteries and miracles go, after conversations, pleading, tears and negotiations, the price became doable. (As if one could even put a price on this superb being.) The mare became hers!

Now she was given a proper name. Baby Doe, after the title character in the opera “The Ballad of Baby Doe”. The character who sang of gold and silver and the moonlight.

Baby Doe, the mare, seemed herself fashioned of gold and silver and moonlight.

The story of Baby Doe, the journey the woman and mare have traveled together is a long and mysteriously woven tapestry.

It has been a tapestry of vets, lameness, pain, colic, anger at all things human, traveling, as they and the polka-dotted Spirit, searched for their “home”. Including the winds and wilds of Wyoming; where Baby Doe would refuse to take cover, even in the bitterest of winds. Instead of turning her hind end to the wind, as do all horses, she would face defiantly into it, her golden mane and tail streaming behind her like the ribbons on a falling star.

The tapestry included returning to the warmer lands of Florida. Here she found Fritz again! Their joyous reunion was followed by months of contented togetherness before life and humans had to once more separate them.   However, they know now that, if they found each other once, there is always a possibility they can find each other again.  That separation need not ever be permanent.

In time, as the mysterious tapestry continued being woven, the human, the mare and the goofy, spotted gelding did indeed find “home” on the land that would become What If Farms…

Pain and physical trials continue for the Doe. There are emotional trials as well resulting from the discomfort. But, they are interspersed with times of peace and physical comfort for the beautiful mare. She loves her herd, her freedom and her life here at What If Farms. Her only job is being a horse, being herself.

AND… in the moonlight of an early evening in late April , one can quite possibly spy Baby Doe in the pasture, dreaming of starlight and fireflies, while shimmering like a unicorn…the faerie folk weaving a magical dance around her.