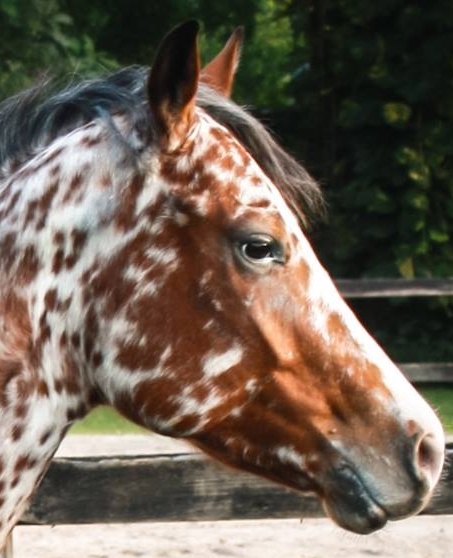 Meet The Animals Series #1: The Story of Spirit

MEET THE ANIMALS SERIES #1: The Story of SPIRIT

Snow still remained in small patches around the fence poles and the air still retained a hint of frost on a sunny, late March morning.

In the dark, warm barn, a mare lay on fragrant pine shavings nosing her little foal, encouraging him to stand.

It didn’t take much encouragement. The little boy, with the adorable constellation of spots all over his little Appaloosa body, jumped up, looked around with curiosity and fun shining from his newborn eyes and was glad to be alive!

He spent the next uncountable days drinking the delicious milk his mother offered, scampering on spindly, wobbly legs, taking long, delicious naps, sniffing wondrous air and earth smells, listening to the birdsong increasing with the advent of Spring and getting used to the presence of two-legged creatures that were definitely NOT horses!

Yes, these two-legged beings were a mystery to the little foal.  They continually had sound coming from their mouths. They had hands that were always reaching for him (unsuccessfully much of the time) and they certainly didn’t smell like mom or the other horses whom he was slowly getting to know.

Oh, how the little foal loved his mama.  She nuzzled and licked him with her warm soft tongue. She sighed patiently as he greedily drank from her teats, and her calm protection surrounded him with peace and well-being.

Life was very good for this happy, little Appaloosa.

Time passed in a comfortable rhythm. The little foal grew bigger and stronger.

Then, one day, the unthinkable happened.  Those noisy beings with the grabbing hands  led his mother away into a box next to their little sanctuary and he was left all alone, able to see her and hear her but not touch or be touched. And he was very, very hungry.

Now there was no mom to feed him.  Instead, there was a bucket of strange smelling liquid that was oddly appealing and repulsive at the same time.

He took a couple sips as best he could and then lay in a corner trying to understand how everything could have changed so much in just a moment.

He lifted his head and whinnied for joy when his mom was eventually brought back near to him and huddled close to her warm body, feeling safe and strangely anxious at the same time.

These kinds of days became more and more frequent.  When he was with his mom he couldn’t bear to leave her side, for even a moment, and would nuzzle and nibble on her, hoping that somehow that would make her able to stay with him always.

But that was not to be.  As time went on, she was taken away for longer and longer periods of time.  No one heard his call, no one answered his call. His little heart hurt with a wound that felt it would never heal.

He dutifully satiated his hunger with the weird liquid stuff in the bucket and stayed very quiet .  Things went more easily for him if he did.

The humans, as he came to understand them, handled him more gently if he just allowed them to put that binding, rough thing over his nose and ears.  When they pulled on him with a rope, if he just walked quietly, they wouldn’t spank his rump or yank on his face.  If he submitted to going up and down the ramp into and out of the scary, dark, closed-in space, they didn’t swipe at him with brooms.

One day, when he was in the scary ,dark, closed-in place, the ground beneath his feet began to vibrate and move and make loud sounds and bumps.  He was on the road!

When he exited that dark, scary place, he found himself surrounded by bright light, more noise that he had ever heard in his life, strange, new horses and all manner of moving, flapping,frightening objects.

“The Champion of the Ponies of America International Futurity and Sale 2011 is Too Legit, Appaloosa weanling out of Dripping in Diamonds!” Loud applause and flashing cameras followed this announcement, as the still-little foal stood very quietly (…simply because there was nothing else he COULD do).

The blur of events that followed eventually led to a longer ride in the dark, scary place, an exit into bright,,hot sunlight, new smelling grass and another little Appaloosa named Jay.

But Jay wasn’t his mama and the little foal felt the hurt in his heart and the anxious feelings in his body seared themselves into his very being. Another thing was becoming more of a constant as well…

Anger at the two-legged beings  that robbed him of his world.  Anger  at Jay… just for being there.  Anger that he must have done something wrong and been a “naughty boy” (a phrase heard frequently from the mouths of the humans; whatever “naughty” meant…since   “naughty”is not an attribute that horses possess).  Anger at the apparent fact that now he would never see his mama again.

The little foal grew bigger in the pasture he shared with Jay. He began to enjoy his life in the warmth and sunlight of his new home. But the gnawing at his heart and mind was a constant. He found some relief in chasing and bullying gentle Jay.  But the anxiety never really diminished.  And so the years passed.

“Yes, of course, I’ll send him down to you for training. Jay, too ? On loan as a lesson horse? Of course! See you soon!”

The now three-year-old gelding ,with Jay in tow, moved again, finding himself in a stall, not WITH, but only NEXT to Jay, no grass to graze, with human hands, yet again, probing and asking and demanding.

For 30 days he was forced to walk, trot, canter with bungees holding his head low, spurs gently yet painfully urging him forward, being tied up in his stall and having to carry weight on his back whenever he did get the opportunity to see sunlight.  He lowered his head, did what was required and just…simmered.

One day, a new human came into his small dark stall.  She was small and gentle .  He eyed her suspiciously and considered if she would be worth bullying, but she just saw an adorable, polka-dotted young horse  with a beautiful soul and heart.

As events turned out, he eventually experienced her smaller weight on his back, her clumsy hands on his reins and her tentative seat and leg signals.  Yet, somehow, he grew fond of this human. He’d watch for her arrival at the barn and call to her.  He enjoyed when she walked him to grassy areas for a nibble or two. He especially enjoyed pulling on the lead rope, exploring every stone, stick and leaf possible while dragging her with him, while also making sure that when she wanted to get a halter or bridle on him...it was quite impossible!

In time, ignoring all warnings given her to the contrary, the gentle, small human became HIS human and upon watching his light- footed Appaloosa trot one day, re-named him SPIRIT.

Together they have traveled to different barns and different states attempting to find “home”.  They added more beloved horses (and even some donkeys) to the herd.  They have learned from and of each other with a multitude of mistakes and ups and downs.

And, finally, they DID find home!

Here at What If Farms.

Spirit is out in the sunlight, starlight, rain and moonlight, whenever he so chooses...

The human hands are always gentle and kind upon him.  He loves his herd. He is proud when he can overcome his anger and more calmly deal with whatever comes his way. He enjoys stealing tools out of workmen’s pockets, loves to “help out” whenever a project is being done and is always looking for the next “game”.

He is exceptionally kind and gentle with children; whereas adults are still a mixed bag for him (although he IS particularly fond of women :)

Our Spirit found his place, his human, and the courage to ever so slowly trust and open his heart.

He is still the anxious, brilliant, funny, bullying, unpredictable, frustrating and adorable Appaloosa he has always been.  But as the years pass, the two of them, horse and human, have found their way together and know they will never give up on each other.

Spirit’s story and adventure continues on at What If Farms!